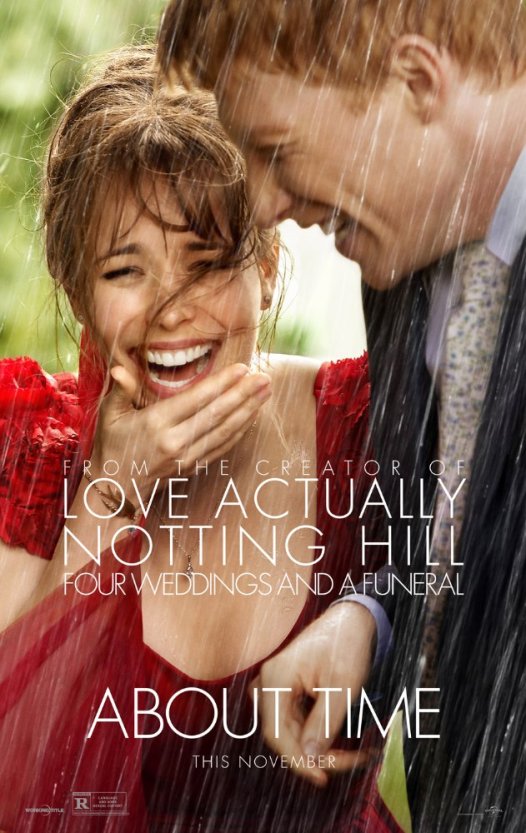 I don’t normally see ‘rom-com’ type films at the cinema these days because at lot of them are very predictable, but I did catch this one on the big screen when it came out.  I’d seen the trailer when watching another film and I love Richard Curtis movies so this is one I just had to see.

The story is that all of the men in Tim’s family, on his fathers’ side can travel through time.  They’re not able to change history but they can change certain things in their own lives. Tim, played by Domhnall Gleeson, uses this opportunity to get himself a girlfriend (that’s it Tim think big…).

Tim meets Mary, played by Rachel McAdams in a sort of ‘blind date’ situation and uses his time travelling abilities to impress and then hopefully date her.  Tims’ Dad, played by Bill Nighy is always there to guide and advise Tim about life and his gift.  There are some laughs in this film but you just see life slightly differently when watching this, some of Tim’s plans don’t always work out and where or not you can travel through time, that’s just life for you.

The cast in this film are fantastic, I mean Bill Nighy is just a legend and Tom Hollander is brilliant as Tim’s land lord, the cynical writer Harry.  This was actually the first time I’d seen Margot Robbie in a film as Tim’s sister’s friend Charlotte.

There’s no effects to mention and I won’t go into wardrobe but I will, however say that this film is very bittersweet too watch. I can’t say too much as I try and review films without any spoilers but it does get emotional towards the end and the message of the film is explained.  It’s a cleverly written film and like I mentioned not all of Tim’s life goes to plan, there’s a catch or two to his gift that he has to learn and deal with.

It’s a lovely film to watch, the cast are brilliant and as with all of Curtis’ films, no one tries to outdo one another.  He directs and writes perfectly, something America have been trying to achieve for a while now with ‘flops’ such as Valentines Day.

Overall it’s a great, feel good film and defiantly one to watch with the family. I’ve got no complaints and this film is certainly on par with Curtis’s earlier work such as Notting Hill and Love Actually.

Perfect Popcorn Score – About Time gets a nine from me, it’s a great film, brilliant acting and a bittersweet ending that stays with you – 9/10.

I did say I’d review older films as well, so here’s one you need to put on your watch list.  I was sitting at home one day, going through all the channels looking for something decent to watch and discovered ‘Still Crazy’ and it’s now one of my personal favorites actually.

‘Still Crazy‘, is all about a ‘rock’ band called ‘Strange Fruit’ and their hopes of a reunion.  The band has a rocky history as they split up and haven’t seen or spoken to each other in years.  Until one day, the keyboard player Tony, played by Stephen Rea is approached by a guy wanting the band to play a large music festival. Tony jumps at the chance of reliving the glory days and first on his list is to be reunited with is Karen.  Karen was madly in love with Brian, the troubled lead guitarist of the band and went everywhere with the fruits as their ‘unoffical’ manager (or maybe mediator). Karen is now working at a hotel, divorced with a daughter, she agrees to help Tony get the Fruits back together.  They all agree to meet however, tensions show as the bass player Les, played by Jimmy Nail really has it in for their lead singer Ray, played by Bill Nighy. After some drama they all hit the road for a tour around Europe and there is some great laughs in this film from all the cast, especially drummer Beano, played by Timothy Spall and of course their roadie Hughie, played by Billy Connolly.

This film is a really feel-good movie and there’s some emotional scenes as well as laughs.  You see that still, after all this time Karen is still madly in love with Brian and Tony has always loved her. Also that Ray has always felt like an outcast because he joined the band after their original singer and Brians’ brother Keith died from a drug overdose.  This reunion heals old wounds and mends broken friendships within the band to help they make it a second time around.

There’s not really any special effects to mention in this film however, the soundtrack is fantastic! There are many songs created for this film and that’s another reason I love it because they really did go for it with this soundtrack.  My favorite song is probably Les’ ‘The Flame, Still Burns’ it’s a little cheesy but it does work well in this film because it relates to the band and Karen’s love for Brian.

Overall, you need to watch this! It’s got a killer cast, proper British greats! This film will make you laugh and cry and sing along! I’m surprised not many people have heard of it with a cast like this but that’s why I wanted to review in on my blog because it’s a hidden gem of a film.

Perfect Popcorn Score – Still Crazy, get’s a great big ten from me! It’s just the perfect feel-good film and I still listen to the soundtrack now!  – 10/10.

Hello and Welcome to Perfect Popcorn Here you’ll find reviews on both new and old films I’ve watched recently, as well as my opinions on actors that have been cast for the latest roles. I’ve always loved films and wanted to blog for a while so I thought it would be ideal to do a movie blog. Just to make you guys aware I do work full time so posts may not be as regular as I’d like but I will try my best! C x