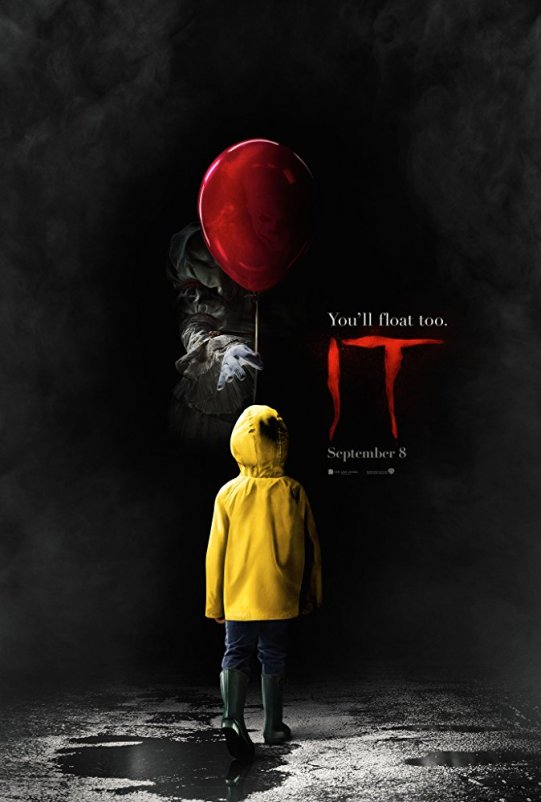 Stephen King is one of the greatest writers going, I mean nearly every one of his books has been adapted on the big or small screen.  It has been adapted before, I’ve not seen the original film but I’m a fan of King’s other stories so I decided to give this a go…

So for those of you like myself that weren’t familiar with the story it’s basically in short, a film about an evil shape-shifting clown that eats children (and maybe adults).  I don’t really like clowns so I’ll be honest I did get a bit creeped out by this, despite it’s 15 age rating.

The acting in this film is brilliant, considering there’s no big hollywood in this movie I thought it was really well cast.  There’s only two actors I recognized, both star in two Netflix series but I’m sure they’ll go on to do other things after their performance in this movie.  BillSkarsgård is fantastic as Pennywise the clown, I first saw him in a Netflix series called, ‘Hemlock Grove‘ which is worth a watch itself.  Now I’ve seen my fair share of bad child actors in films but the cast are all brilliant in this.

The effects in this movie are great, it wasn’t given the biggest of budgets compared to a lot of movies out there and because of this, made a killer profit at the box office!  The makeup FX for Pennywise was spot on, less is more sometimes and he looked so creepy so well done guys!

I really enjoyed this film, there’s some light humor in it and great sarcasm. It actually references Molly Ringwald at one point and I think in doing so makes you think of ‘The Breakfast Club‘ which is a film about a group of ‘misfits’ banding together (sound familiar?).

I think this film cause have been made so much darker if it was given the 18 age rating the original was but director Andy Muschietti has confirmed that a sequel is in the works and set to be released in September 2019.  The sequel will tell the story of the second half of the book where Pennywise returns 27 years later.  The cast have all said who they would like to play their characters in the second film and I’ve got to say there’s some pretty good choices… I will be doing a further blog post about my thoughts on these choices and who I think should play them also so please do look out for it soon.

Perfect Popcorn Score –I’m giving the film a solid 8, the story was always going to be great as it’s written by King and acting, effects and everything else is all gooood! 8/10

This was one of many  movies just added onto my Sky movie package so I decided to give it a go.  It just sounded like a film filled with violence and let’s face it folks, sometimes it’s just nice to switch off and watch something like that…

So it’s a film that get’s into it quite early on and just doesn’t stop from there.  There is a ‘crazy’ red-neck family in this movie, aren’t they always fun? Luke Evans plays the main character, he’s got no name though (ohhhh mysterious) and he’s completely cold and ruthless all the way through the movie.

Basically the family kidnap Luke and his girlfriend when robbing them proves difficult, they try to kill the pair and then the tables are turned…

The film seems pretty low budget but the cast are decent actors. Adelaide Clemens is really good in this film however, I won’t say much about her character as it’s an interesting situation… I will say though that I actually thought it was Carey Mulligan (my bad) because the pair look so similar, whilst on that subject Michelle Williams could also be related to the two of them…

There’s no effects really other than your standard gore and violence, which is all filmed pretty well. There’s plenty of torture scenes too so if you’re squeamish this isn’t a film for you…

This movie isn’t just your average gory redneck in the middle of nowhere movie, there’s a few twists in the story which leave you unsure of who you’re supposed to be rooting for. I really enjoyed the film, it keeps you guessing and there’s a slight twist to it.  A simple story really but very well written and the ending did leave me wanting more which rarely happens when it comes to this type of film. I think they could defiantly do more with Luke Evans character here that wouldn’t ruin this movie or be a terrible idea for another film. Basically if you want a fast paced, action ride with a large amount of ‘mindless violence’ then this is the movie for you! (Making it one of my dad’s favorites…)

Perfect Popcorn Score – I’m giving it a solid eight it’s good violent fun and there’s an interesting sub-plot going on within a straight forward story-line that makes this movie stand out. Decent acting for a low budget film too… 8/10

Hello and Welcome to Perfect Popcorn Here you’ll find reviews on both new and old films I’ve watched recently, as well as my opinions on actors that have been cast for the latest roles. I’ve always loved films and wanted to blog for a while so I thought it would be ideal to do a movie blog. Just to make you guys aware I do work full time so posts may not be as regular as I’d like but I will try my best! C x